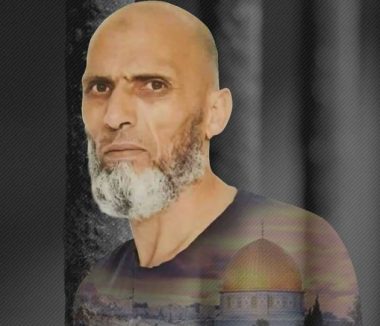 Israeli Internal Security Minister Gilad Erdan has decided against transferring the corpse of a Palestinian detainee, who was died from complications after Israeli soldiers assaulted him in prison, back to his family for burial.

The detainee Aziz ‘Oweisat, 53, died a week ago while receiving treatment at an Israeli medical center; he suffered serious complications after he was assaulted by several Israeli soldiers in the prison, who claimed he attacked an officer with a sharp object.

Aziz suffered brain hemorrhage and a heart attack after the soldiers continuously assaulted him in Eshil Israeli prison, on May 2, 2018, and went into a coma before he was moved to Ramla Israeli Medical Center.

Later, the detainee was moved to Assaf Harofeh Medical Center due to the seriousness of his condition, but he suffered further deterioration, and was transferred to Tal HaShomer Medical Center.

On May 10th, 2018, he underwent heart surgery at Tal HaShomer Israeli Medical Center, but remained in a critical condition until he passed away.

Israeli sources said the head of the Israeli Internal Security Agency, and the Prison Authority, opposed Erdan’s decision, because it could lead to large-scale protests, especially during Ramadan.

They fear that this decision would also lead to further complications in the efforts to retrieve the corpses of Israeli soldiers who are believed to be killed, and held by Hamas in Gaza, since the Israeli offensive in 2014.

However, Erdan said this decision will not cause to clashes and tension in Jerusalem, and aims at pressuring Hamas to release the corpse of Israeli soldiers, without holding prisoner swap agreements.

The final decision remains in the hands of Israeli Prime Minister Benjamin Netanyahu.