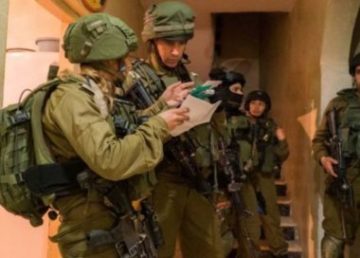 Israeli soldiers abducted, on Sunday at dawn, six Palestinians, including two siblings, in Hebron, Bethlehem and Jenin, in the occupied West Bank.

The Palestinian Prisoners’ Society (PPS) said the soldiers invaded and searched many homes, and interrogated many Palestinians before abducting the six.

The PPS office in Hebron, in the southern part of the West Bank, said the soldiers abducted Baha’ Issa Zama’ra, and his brother Ahmad, in addition to Odai Hasan Zama’ra, from their homes in Halhoul town, north of Hebron.

The soldiers also abducted Mohammad Nidal Shalameesh from his home in Burqin town, west of Jenin, in northern West Bank.