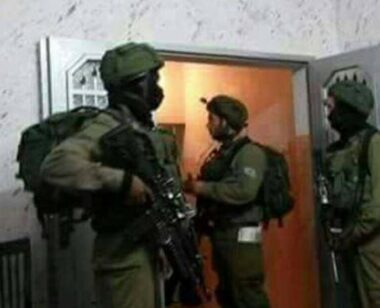 In Hebron, in the southern part of the West Bank, the soldiers invaded Yatta town, south of the city, searched homes, and abducted Hasan Jibrin Morr, 32.

The soldiers also invaded several neighborhoods in Hebron city and the Al-Arroub refugee camp, installed roadblocks on Hebron’s northern and southern roads, the main entrances of Sa’ir and Halhoul towns, before stopping and searching dozens of cars, and interrogated many Palestinians while inspecting their ID cards.

In Ramallah, in the central West Bank, the soldiers abducted a young man from his home in Kharbatha al-Misbah town, west of the city.

In Nablus, in the northern West Bank, the soldiers invaded several neighborhoods in the city, stormed and ransacked homes, and abducted a former political prisoner, Abdullah ‘Aasi, in addition to Essam Zablah and Ibrahim Matar from their homes.

The soldiers also invaded and searched an apartment building in Rafidia, in Nablus and interrogated many Palestinians while inspecting their ID cards.

In occupied Jerusalem, the soldiers invaded many neighborhoods and towns, including Silwan and Jabal al-Mokabber, and closed many streets.