WAFA: “After 15 years of blockade, four out of five children in Gaza say they are living with depression, grief and fear” 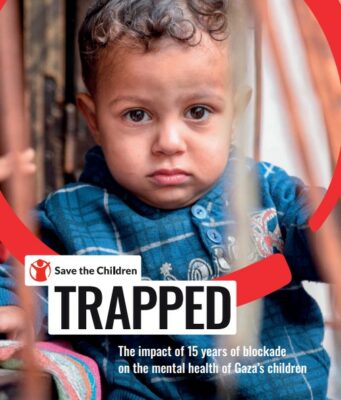 GAZA CITY, Wednesday, June 15, 2022 (WAFA) – Fifteen years of life under blockade has left four out of five children in the Gaza Strip reporting that they live with depression, grief, and fear, according to disturbing findings released today by Save the Children.

The research found the mental well-being of children, young people, and caregivers has dramatically deteriorated since a similar study in 2018, with the number of children reporting emotional distress increasing to 80% from 55%. These findings again show that maintaining the current status quo is negatively impacting children’s well-being and hopes for a better future.

It is now more critical than ever that the government of Israel lifts the blockade of the Gaza Strip, and that local authorities, the international community and donors support the rapid strengthening of child protection and mental health support services for affected children, Save the Children said.

In the past 15 years, children in the Gaza Strip have endured six major moments – five escalations in violence and the COVID-19 pandemic – as well as a life-limiting land, air, and sea blockade imposed by the government of Israel. Children make up 47% of Gaza’s population of two million, with over 800,000 having never known life without the blockade.

As well as physical harm, economic deprivation, and lack of access to essential services such as healthcare, the blockade has sparked a mental health crisis for children and young people, today’s research shows.

Amr, 14, still remembers how afraid he felt during the escalation in violence last year: “During the night, I couldn’t sleep because I had a nightmare. I was really afraid that they would bomb our house or would bomb our neighbors again. I was on edge. I would tell my dad about the nightmares and he would reassure me that it won’t happen. Then I would go back and try to sleep again.”

For the report Save the Children consulted 488 children and 168 parents and caregivers in the Gaza Strip in a repeat of similar research by the child rights organization in 2018.

Caregivers described concerning behavior in children and young people, with 79% reporting an increase in bedwetting over the past few years and 78% reporting that their children rarely completed tasks. About 59% said there had been an increase in children experiencing difficulties in speech, language, and communication, including temporary reactive mutism, which is a symptom of trauma or abuse. All these behaviors have a huge immediate and long-term impact on the development, learning, and social interaction of children, Save the Children said.

Caregivers are also experiencing higher levels of emotional distress, according to the report, with 96% reporting feeling unhappy and constantly anxious.

Jason Lee, Country Director for Save the Children in the occupied Palestinian territories, said: “The children we spoke to for this report described living in a perpetual state of fear, worry, sadness and grief, waiting for the next round of violence to erupt, and feeling unable to sleep or concentrate. The physical evidence of their distress – bedwetting, loss of ability to speak or to complete basic tasks – is shocking and should serve as a wake-up call to the international community.

“Five years ago, caregivers said that their capacity to support their children is being pushed to the limit by the blockade, chronic poverty, and insecurity, and would most likely be utterly destroyed in the event of another conflict. Our findings show that caregivers’ concerns have sadly come true.

“We call on all sides to tackle the root causes of this conflict, and take steps to protect all children and families who deserve to live in safety and dignity. We need an immediate end to the conflict and economic deprivation that are huge stressors in children’s lives, as well as action to support the coping potential and resilience of children and their families in the Gaza strip.”

Ameera, 14, told Save the Children how her life would change if the blockade was removed today, saying she would “feel more connected to the whole world. I can do whatever I want and go to wherever I want. I would study computer science and specifically get a degree in virtual reality design. This is what I really want to do in my life but I can’t do it here in Gaza, we don’t have such a program.”

Save the Children called for the government of Israel to take immediate steps to lift the blockade of the Gaza Strip within the framework of UN Security Council Resolution 1860 (2009), and on the international community to urgently call for Israel to take these steps, along with bringing an end to the ongoing occupation and work with all parties to create conditions for renewed talks between the parties to the conflict towards creating a just solution.