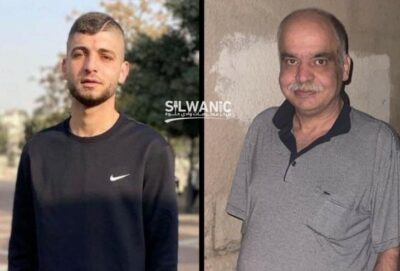 On Monday evening, Israeli soldiers abducted six Palestinians, including an elder and his son, in several parts of the occupied West Bank.

The Tubas office of the Palestinian Prisoners Society said the soldiers invaded the Ein Al-Baida village in the Northern Plains of the West Bank and abducted Raddad Hamed Daraghma and Yazan Mithqal Fuqaha.

In occupied Jerusalem, the soldiers abducted an elder, Khalid Sharifa, and his son Mohammad from the Old City.

The soldiers also invaded and ransacked many homes in Silwan town, in Jerusalem and confiscated surveillance recordings and equipment from homes and stores.

In Hebron, in the southern part of the occupied West Bank, the soldiers abducted Ezz Jawad Tabakhi from the Old City and Mohammad Hamamda, 24m, from Ma’in village in Yatta, south of the Hebron.