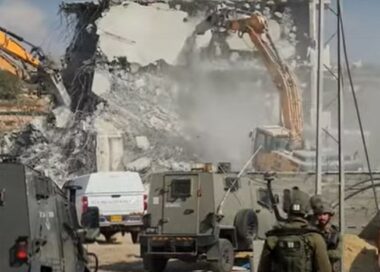 On Monday, Israeli soldiers demolished an under-construction home in the Al-Baq’a area, east of Hebron, in the southern part of the occupied West Bank.

The Palestinian News & Info Agency (WAFA) said several army vehicles and bulldozers invaded the area and demolished the property for being built without a permit.

WAFA added that the home is owned by a Palestinian, Azzam Abdul-Aziz Jaber, and was meant to house him and his family.

It is worth mentioning that Al-Baq’a is considered the “fruit basket of Hebron” due to its fertile nature and resources.

However, the Israeli occupation army frequently invades it, demolishing homes, structures, and irrigation pools, to force the Palestinians out and replace them with illegal colonies and colonialist projects.