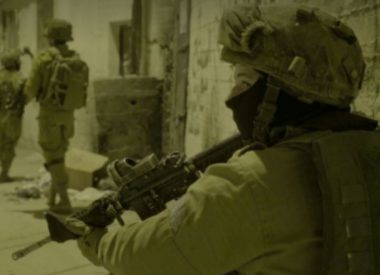 The Palestinian Prisoners’ Society (PPS) has reported that Israeli soldiers abducted, on Monday at dawn, six Palestinians, including five former political prisoners from their homes in Jenin governorate, in the northern part of the occupied West Bank.

The PPS said the soldiers searched many homes and abducted Faraj Omar Sanouri and Yahia Najm, from their homes in the as-Sikka and al-Bayader neighborhoods in Jenin city.

It added that the soldiers also abducted Emadeddin Jamal Abu al-Haija, from his home in Jenin refugee camp.

Another former political prisoner, identified as Assem Abdul-Rahman Abu al-Kheir, was abducted from his home in Silat al-Harithiya town, northwest of Jenin.

In related news, the soldiers abducted a young man, identified as Majd Abu an-Nada, from his home in Jabal Abu Dheir in Jenin city.

Furthermore, the soldiers shot a Palestinian man in his own home, and abducted his son, in Halhoul town, north of Hebron, in the southern part of the occupied West Bank. The army also abducted four other Palestinians in Hebron and Ramallah.

It is worth mentioning that the soldiers abducted, at dawn, at least seventeen Palestinians from their homes, in several parts of the West Bank.

In Nablus, in northern West Bank, a Palestinian infant was injured after a group of illegal Israeli colonialists hurled stones at her family’s car.