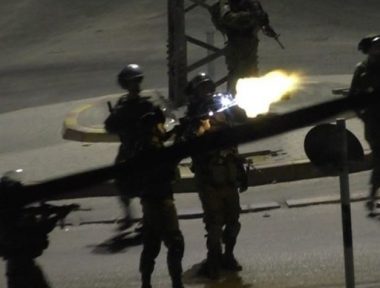 Israeli soldiers abducted, overnight until early morning hours Tuesday, at least sixteen Palestinians, including one woman, from their homes, in several parts of the occupied West Bank, the Palestinian Prisoners’ Society (PPS) has reported.

The PPS office in Hebron, in the southern part of the West Bank, said the soldiers invaded Deir al-‘Asal village, west of Doura town, searched homes and abducted one woman, identified as Ferial ad-Darwish, 42.

Media sources in the village, said the soldiers called for reinforcements, and started breaking into homes and ransacking them, in addition to firing gas bombs into many homes.

The soldiers also invaded and searched homes in Bethlehem, Nablus, and other Palestinian communities, in addition to confiscating thousands of shekels from the home of Sofian Zaki Bahar, in Hebron.

The Israeli army confirmed its soldiers have arrested sixteen Palestinians; one of them is a former political prisoner, identified as Ahmad Amer Nassar, and confiscated thousands of Shekels from many homes, in addition to reportedly locating weapons.

At the time of this report, twelve of the abducted Palestinians have been identified as: