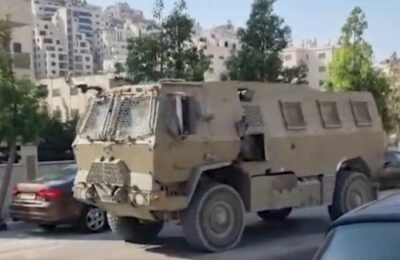 On Monday dawn, Israeli soldiers invaded and ransacked dozens of homes across the occupied West Bank, and abducted sixteen Palestinians.

In the southern part of the West Bank in Hebron, the soldiers abducted Hamza Nabil Zama’ra and Abed Hazem al-Wawi, from Halhoul town, north of the city, in addition to Taha Mohammad Asafra, Safwat Asafra, and Moayyad Mohammad Ibreiwish from Beit Kahil, northwest of Hebron.

In Bethlehem, the soldiers invaded the Saff Street area in the city’s center and abducted Omar Sami al-Hreimi, 55.

In Salfit, in the central West Bank, the soldiers invaded Marda village, north of the city, and abducted Rami Suleiman, in addition to Yousef Qambaz from Farkha village, southwest of Salfit. In Nablus, in the northern West Bank, the soldiers abducted Kamal Suleiman Hanani from his home in Beit Furik village southeast of the city, and Jihad Shehada Zeitawi from Zeita Jamma’in village, southwest of Nablus.

In Jenin, in the northern West Bank, the soldiers abducted Mousa Jaloudi and Mohammad Obeid, from Kafr Ra’ey village southwest of the city, after stopping them at a military roadblock south of Jenin, in addition to Mo’tasem Ammar Atatra from Ya’bad town, west of Jenin.

In Ramallah, in the central West Bank, the soldiers abducted Mohammad at-Tatar, 26, and Mohammad Shalabi, 26, in the Ein Monjid area; the two Palestinians are from the Gaza Strip but are living in Ramallah.

Also, the soldiers invaded Silwad town, east of Ramallah, and abducted a young man, Moayyad Anwar Hamed, from his home.

In related news, dozens of soldiers, and bulldozers, invaded Rommana town, west of Jenin, after surrounding and isolating it and imposing a curfew before demolishing two homes.

In the Gaza Strip, a police officer, Mahmoud Ahmad Daoud, died from serious wounds he suffered during the Israeli bombing of Gaza city.