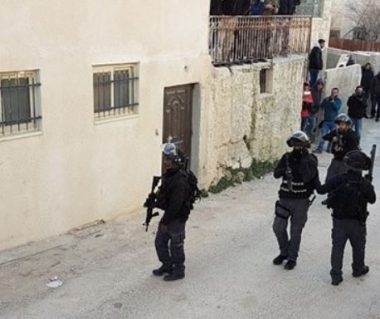 Israeli soldiers abducted, overnight until morning hours Wednesday, sixteen Palestinians, including two children, in the West Bank, and one from a village near Nazareth.

In Bethlehem, the soldiers abducted Wael Amjad Khatib, Mohammad Jamal al-‘Azza and Nawwaf Sawarka, after invading their homes and searching them.

Another Palestinian, identified as Ali Yousef Marouf, was abducted from his home in ‘Allar town, in the northern West Bank district of Tulkarem, while Abdullah Fuad Tareeq was abducted in the al-Jiftlik village, in Jericho.

Furthermore, the soldiers abducted Sheikh Firas Omari, a member of the Freedoms and Detainees Committee, from Sandala village, between Nazareth and Jenin.

In Jerusalem, the soldiers abducted two sibling children, identified as Majd and Jawad Hani Abu Rmeila, from their home in Silwan town, south of the Al-Aqsa Mosque.

Also in Jerusalem, the soldiers Ahmad al-Qunbar, the father of Fadi, who was killed by the army on January 8th 2017, Ahmad’s other son, Monther, shortly after completely encasing their home with concrete.

It is worth mentioning that, on Wednesday at noon, two Palestinian agricultural sheds, owned by Salama Ahmad Zbeidat and Ahmad Odah Zbeidat,  in Zbeidat village, north of Jerusalem,