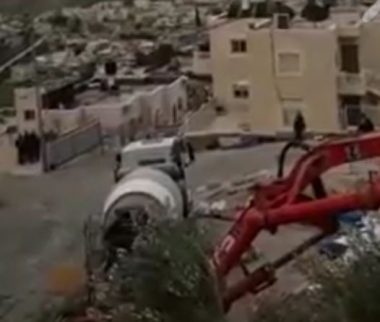 Israeli soldiers invaded the Jabal al-Mukabber neighborhood, in the southeast part of Jerusalem, on Wednesday, and completely encased the home of a Palestinian man who was killed by Israeli forces earlier this year.

A large military force surrounded and invaded the neighborhood, and, according to eyewitnesses, the troops brought with them a concrete truck. They then stationed the truck in front of the family home of Fadi al-Qunbar, who was killed by Israeli forces, and began filling the entire home with concrete.

It is worth mentioning that Fadi al-Qunbar, 20, was killed by the army on January, 8, 2017, after driving a truck through a crowd of Israeli soldiers on a street near Sur Baher, southeast of Jerusalem, killing four, and wounding 15 others.

In related news, dozens of Palestinians, including many schoolchildren, and students of the Al-Quds University, in Abu Dis town, southeast of Jerusalem, suffered the severe effects of teargas inhalation, after the soldiers invaded Abu Dis town, and clashed with local youngsters, who hurled stones on them.