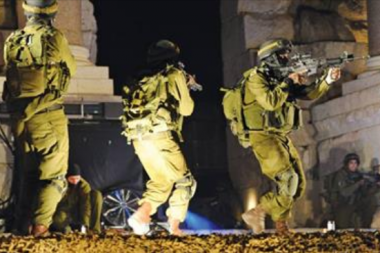 Israeli soldiers abducted, overnight and at dawn Sunday, at least ten Palestinians, more than half of them children, in several parts of occupied East Jerusalem, after the army invaded and ransacked many homes.

The Israeli army claimed that the arrested Palestinians “participated in hurling stones, fireworks and Molotov cocktails,” at officers and soldiers, over the past two weeks.

Four of the abducted Palestinians are from the Old City of Jerusalem, and were taken to several detention and interrogation centers.

Some of the abducted Palestinians, from the Old City and al-‘Isawiyya town, have been identified as Mohammad Monther ‘Ateyya, Mohammad Tha’er Mahmoud, Mahmoud Adeeb Abu al-Hummus, Abada Najeeb and Mohammad Abu Sneina.

It is worth mentioning that the soldiers also abducted a child, identified as Shahad Mohammad Abu Kweik, 15, from Qalandia refugee camp, after detaining her in Qalandia terminal, north of Jerusalem.

Shahad is the sister of a detainee, identified as Salim Abu Kweik, and will be sent to court sometime today, Sunday.