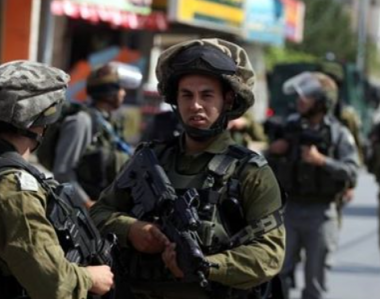 The Palestinian Prisoners Society (PPS) has reported that Israeli soldiers abducted, on Tuesday at dawn, at least ten Palestinians in different parts of the occupied West Bank. On Monday evening, the soldiers abducted a merchant from Gaza, while crossing the Erez terminal.

In Hebron, in the southern part of the West Bank, the soldiers abducted a former political prisoner, identified as Rezeq Rajoub, from Doura town, south of the city.

The Hebron office of the PPS said Deikat’s abduction, came just two weeks after he served a two-year imprisonment sentence, and that he spent a total of 23 years in Israeli prisons, in previous abductions.

Also in Hebron, the soldiers invaded, and violently searched many homes in Ethna town, south of Hebron, abducted Jibrin Thiab al-Jeyyawi, 58, and illegally confiscating cash and gold from his home.

The Nablus office of the Palestinian Prisoners Society (PPS), in the northern part of the West Bank, said the soldiers searched many homes in the district, and abducted six Palestinians.

On Monday at night, the soldiers invaded a home, owned by Yasser Mizher, in the northern part of Silwad town, northeast of Ramallah, and turned it into a military post and a monitoring tower.

The soldiers said they want to monitor a bypass road, used by Israeli colonist, and passes near the mentioned property.

Silwad has been subject to ongoing invasionz and violations, while the soldiers also detained and interrogated many Palestinians, including several children.

On Monday evening, the soldiers abducted a Palestinian merchant, identified as Hisham Abu Zayed, after interrogating him for several hours while trying to cross the Erez border terminal, in the northern part of the Gaza Strip.

Abu Zayed was returning home when the soldiers abducted him, and was taken to an unknown destination.

It is worth mentioning that the Israeli army have abducted twenty merchants from Gaza, since the beginning of this year.