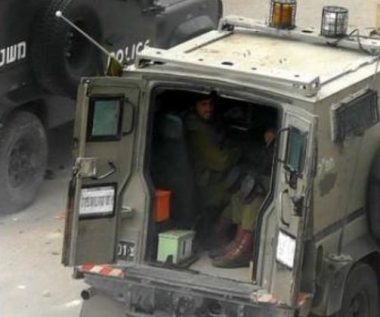 Israeli soldiers abducted, on Monday at dawn, thirteen Palestinians, including children, from their homes in several parts of the occupied West Bank.

Dozens of soldiers invaded Hizma town, northeast of occupied East Jerusalem, searched many homes, and abducted five Palestinians, including a child, only 10 years of age.

Local sources in the town said the soldiers smashed many doors and windows of the invaded homes, and violently searched them, before abducting the five Palestinians.

The town has been under strict siege, and constant invasions, for more than fifty days.

In addition, the soldiers invaded Burqin town, west of the northern West Bank city of Jenin, and abducted a young man, identified as Rajeh Sa’id Qabalawi.

In Hebron, in the southern part of the West Bank, the soldiers invaded homes in the al-‘Arroub refugee camp, north of the city, and abducted Hamza Amjad Mousa.

The soldiers also invaded many neighborhoods in Hebron city, in addition to the towns of Shiokh and Yatta, in addition to installing roadblocks at the main entrances of Sa’ir and Halhoul towns, and Jouret Bahlas area, north of Hebron, before stopping and searching dozens of cars, and interrogated many Palestinians while inspecting their ID cards.

Furthermore, the soldiers invaded homes in ‘Aida refugee camp, north of Bethlehem, before abducting a child, identified as Mustafa Saleh Abu Hammad, 15, in addition to Hamza Khalil Ja’fari, 20, who was taken from his home in Deheishe refugee camp, south of Bethlehem.

The soldiers also abducted Ahmad Ra’fat and Qussai Jamal, from their homes in Doura al-Qare’ village, northeast of Ramallah.