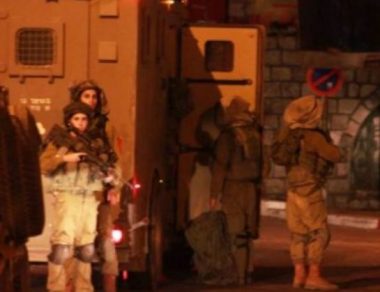 Israeli soldiers abducted, overnight and on Thursday at dawn, at least ten Palestinians in different parts of the occupied West Bank, and summoned several Palestinians for interrogation.

In Jenin, in the northern part of the occupied West Bank, the soldiers searched several homes and abducted Ayyoub Enfei’at, and his brother Ayyoub.

Also in Jenin, the soldiers invaded ‘Aneen nearby village, west of Jenin, searched homes, and abducted Abdul-Nasser Mohammad Yassin, 42, after storming his home and ransacking it.

The soldiers also invaded several communities in the northern West Bank district of Nablus, and abducted Professor Essam Rashed al-Ashqar, 57, who teaches at the Najah University in the city.

The Nablus office of the PPS said Professor Al-Ashqar was repeatedly abducted and imprisoned by Israel, including this year. The soldiers took him prisoner after invading his home, and violently searching it.

In Hebron, in the southern part of the West Bank, the soldiers invaded Beit Ummar town, north of the city, violently searched homes and summoned two Palestinians for interrogation in Etzion military base and security center.

The soldiers invaded the home of Mohammad Awwad Awad, of the Popular Committee in Hebron, and violently searched it for more than two hours.

Awad said the soldiers smashed the main and inner doors of his property, and caused excessive property damage while searching it, before summoning his two sons, Ahmad, 30, and Mohammad, 26, for interrogation in Etzion.

He added that this was the second time this month that the army invaded his property, and violently searches it.

Also in Beit Ummar, the soldiers stormed the nearby home of Mahmoud Abdul-Aziz Awad, 31, under the allegation of searching for his son, who is still under interrogation, after the Israeli army abducted him two weeks ago.

Furthermore, the soldiers searched homes in occupied East Jerusalem, abducted Amjad Abu Sbeih, who was only released from prison just ten days ago, and instantly slapped an arbitrary administrative detention against him, holding him captive without charges or trial.

In Qotna town, northwest of Jenin, the soldiers abducted Mojahed Abu Shamasna, after breaking into his home and searching it.

In Jericho, the soldiers abducted one Palestinian, identified as Mohmmad Hussein Tabeyya, after breaking into his home and searching it.