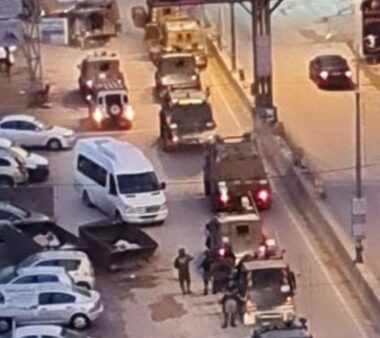 On Wednesday dawn, Israeli soldiers abducted ten Palestinians after the army stormed and ransacked many homes across the occupied West Bank.

In Jenin, also in the northern West Bank, the soldiers invaded Jaba’ town, southwest of the city, searched homes, and abducted Khaled Alawna.

It is worth mentioning that Palestinian resistance fighters exchanged fire with the soldiers during the Jaba’ invasion.

In Hebron, in the southern part of the West Bank, the soldiers abducted Mohammad Yousef Shahin from Doura town, southwest of Hebron, Atallah Ismael At-Teety from the Al-Fawwar refugee camp, and Ahmad Al-Battat from the Ath-Thaheriyya town, south of Hebron, after storming their homes and ransacking them.

The soldiers also stormed a lathe workshop in the Al-Fawwar refugee camp and confiscated its equipment and machines before shuttering it.

In occupied Jerusalem, the soldiers invaded the Al-Ezariyya town, east of the city, and abducted a former political prisoner, Mohammad Abdul-Hadi Adwan, from his home. Dozens of soldiers also invaded the Shu’fat refugee camp and searched homes.