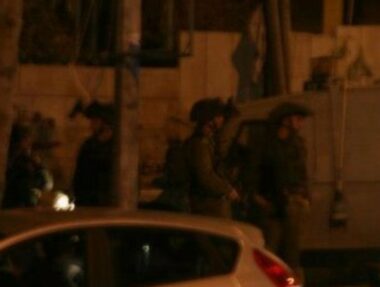 On Tuesday dawn, Israeli soldiers invaded and ransacked many homes across the occupied West Bank, and abducted at least ten Palestinians.

In Bethlehem, south of occupied Jerusalem, the soldiers stormed and ransacked many homes in several parts of the city and abducted eight Palestinians, seven from the same family, including siblings.

The invasion led to protests in several parts of the city before the soldiers fired a few live rounds, rubber-coated steel bullets, and gas bombs.

In Jenin, in the northern West Bank, the soldiers abducted a young man, Odai Sheikh Ibrahim, after storming his home and ransacking it in the Eastern Neighborhood of the city.

The soldiers fired many rubber-coated steel bullets, gas bombs, and concussion grenades, causing many Palestinians to suffer the effects of tear gas inhalation.

In Salfit, in the central West Bank, the soldiers invaded the az-Zawiya town, west of the city, and stormed the family home of Omar Abu Laila, 19, who was killed by the soldiers on March 19, 2019, and ransacked the property.

It is worth mentioning that the army detonated the family’s first home not long after the soldiers killed Omar.