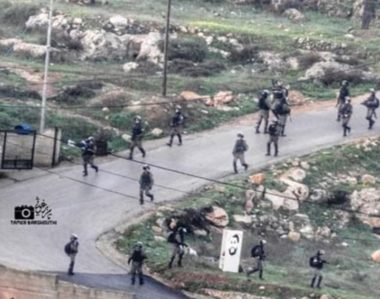 Israeli soldiers abducted, on Monday at dawn, ten Palestinians from Kobar town, north of the central West Bank city of Ramallah, after invading and searching their homes, and confiscated a mobile phone.

The invasion was carried out while military bulldozers closed the road between Kobar and nearby Burham, with concrete blocks.

The soldiers invaded and ransacked many homes, causing excessive property damage, especially after they smashed main doors of a number of homes, in addition to the very violent searches.

Furthermore, the soldiers invaded the home of Saleh Omar Barghouthi, 29, who was killed by the army on December 12, 2018, interrogated his widow, Shaima’ Rimawi, for several others, and confiscated mobile phones and more than 7000 Shekels.

The soldiers also invaded and ransacked Omar Barghouthi, the father of Saleh, in Beit Rima town, north of Ramallah.