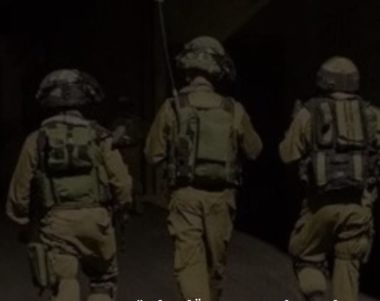 Israeli soldiers abducted, on Tuesday at dawn and morning hours, thirteen Palestinians, including four former political prisoners and one woman, in Jenin, Qalqilia and Jerusalem, in the occupied West Bank, the Palestinian Prisoners’ Society (PPS) has reported.

The Jenin office of the PPS, in northern West Bank, said the soldiers abducted a former political prisoner, identified as Jaber Noah, from his home in Jenin refugee camp.

It added that the soldiers also Moayyad Turkman, after stopping him at a sudden military roadblock, near Jenin, in addition to Morad Fashafsha and Baha’ Fayez Salatna, from their homes in Jaba’ town, southwest of Jenin.

The soldiers also abducted Mustafa Marwan Zayyoud, 21, after storming his home and ransacking it in Silat al-Harithiya town, west of Jenin.

In addition, the soldiers invaded and searched homes in Qalqilia, in northern West Bank, and abducted Abboud Abu Sheikh, 21, and Nour Adnan ‘Aabed, 20.

It is worth mentioning that Abdul-Razeq was released a few hours after the soldiers abducted him, but was slapped with an order preventing him from entering his town for one week.

In related news, the soldiers abducted one Palestinian, and searched many homes, in the southern West Bank city of Hebron, and Yatta town west of the city.