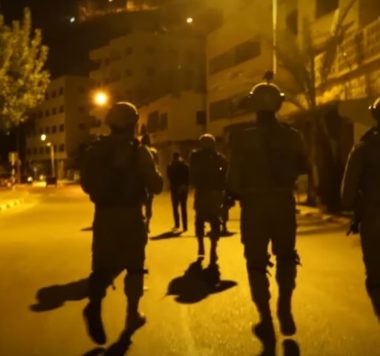 Israeli soldiers abducted, on Thursday at dawn, thirteen Palestinians from their homes in several parts of the occupied West Bank, and confiscated cash. The army also claimed to find weapons in some homes.

The Palestinian Prisoners Society (PPS) has reported that the soldiers invaded and violently searched dozens of homes, stores and warehouses in the West Bank, and interrogated many Palestinians while inspecting their ID cards.

The soldiers also illegally confiscated cash from some of the invaded homes, in Qabatia town, south of the northern West Bank city of Jenin.

In addition, the army said its soldiers found and confiscated weapons, apparently homemade, in Teqoua’ Palestinian town, east of Bethlehem.

One of the abducted Palestinians, identified as Baha’ Nathmi ‘Oweiss, was taken prisoner at Beit El roadblock, north of Ramallah, in central West Bank.

At the time of this report, eleven of the abducted Palestinians, have been identified as: