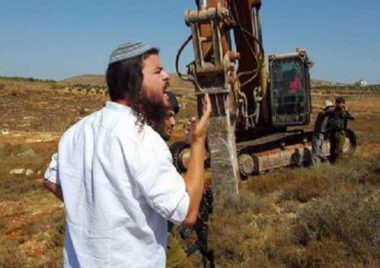 Groups of illegal Israeli colonists invaded, on Thursday morning, Palestinian lands in Burin village, south of Nablus, and Ya’bad town, south of Jenin, in northern West Bank, before bulldozing them and uprooting trees to expand their outposts.

The colonists are trying to expand the illegal Yitzhar colony, which was built on private Palestinian lands.

In addition, groups of colonists invaded Palestinian lands in Ya’bad town, south of the northern West Bank city of Jenin, and stating preparing for paving a road leading to a newly installed illegal outpost.

The outpost was installed, nearly two months ago, by an armed colonist who brought an RV into the Palestinian land and built two barns for sheep and cows.

The colonist, and with the help of other assailants, cut and uprooted Palestinian olive trees, while the Israeli army just stood and watched, and are now preparing to pave a road leading to his illegal outpost.