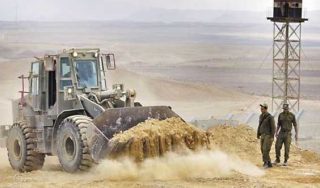 Israeli navy ships attacked, Thursday, Palestinian fishing boats within three nautical miles from the shore of Gaza city, while army vehicles carried out a limited invasion into Palestinian lands in Khan Younis, in the southern part of the Gaza Strip.

Media sources said the navy ships fired several live rounds at fishing boats and sprayed them with water cannons forcing the fishermen to sail back to shore without being able to fish to provide for their families.

They added that this violation took place despite Israeli claims about allowing the fishermen to fish within 6 nautical miles, as the navy continues to attack them and their boats even within three nautical miles.

Eyewitnesses said the invasion was carried out by three tanks and three armored D9 bulldozers, that were stationed in Kissufim military base, near the fence northeast of Khan Younis.

The bulldozers leveled sections of the invaded lands, and installed sand hills in other parts while firing sporadic rounds of live ammunition.