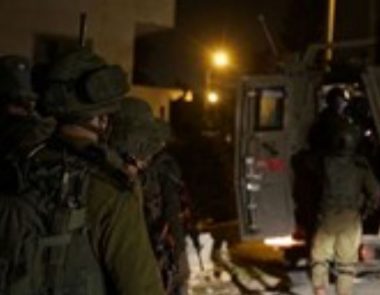 Israeli soldiers abducted, Monday, at least thirteen Palestinians, including a child and a father along with his son, mainly from their homes in several parts of the occupied West Bank, including occupied East Jerusalem, the Palestinian Prisoners’ Society (PPS) has confirmed.

The PPS said the soldiers abducted two young men, who remained unidentified at the time of this report, while walking on Sultan Suleiman Street, near Bab al-‘Amoud and Bab as-Sahera gates of the Old City, after repeatedly beating and clubbing them.

In Hebron, in the southern part of the occupied West Bank, the soldiers invaded and searched many homes in the al-‘Arroub refugee camp, north of the city, and abducted five Palestinians, including one child.

Furthermore, the soldiers installed military roadblocks at the entrances of Sa’ir and Halhoul towns, in addition to Hebron’s northern road, before stopping and searching dozens of cars, and interrogated the Palestinians while inspecting their ID cards.

In Tulkarem, in northern West Bank, the soldiers also searched homes and abducted Essam al-‘Aloul along with his son Laith, after invading and ransacking their homes in Nur Shams refugee camp, east of the city.

In Bethlehem, south of occupied Jerusalem, the soldiers invaded and searched homes in Teqoua’ town, southeast of the city, and abducted Mo’men Rateb al-‘Amour, 18, and Mahmoud Ali al-‘Amour, 19.