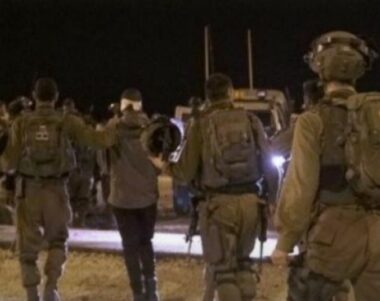 The soldiers chased and abducted eighteen Palestinian workers near the gate of the illegal Annexation Wall in Barta’s ash-Sharqiya village northwest of the northern West Bank city of Jenin and took them to an unknown destination.

The soldiers also invaded the family home of Ahmad Saleh Refa’ey in Rommana village, northwest of Jenin, but he wasn’t there and informed the family that they would continue to invade and ransack the property until he turned himself in.

Many Palestinians protested the invasion before the soldiers shot one with a rubber-coated steel bullet and caused many to suffer the effects of tear gas inhalation.

In Ramallah, in the central West Bank, the soldiers abducted a university student Abdullah al-Lolo, from Birzeit, north of the city, and Mohammad Jamal al-Khawaja from Ni’lin village, in addition to Qussai Abda and Raed Mohammad Abu Bakr from Kharbatha al-Misbah town, west of Ramallah.

In Hebron, in the southern part of the West Bank, the soldiers abducted a child, Farahat Nader Rajabi, 14, from the city’s southern area.

The soldiers also installed many roadblocks at the main entrances of Sa’ir and Halhoul towns, Hebron’s eastern and southern roads, before stopping and searching dozens of cars.

In addition, the soldiers abducted a former political prisoner, Noureddin Ibrahim al-Hreimi, 25, from his home in Harmala village, southeast of Bethlehem, and Ehab Khaled Sabah from Tuqu town, east of the city.

In Tubas, in the northeastern West Bank, the soldiers abducted the head of Ibziq Village Council Abdul-Majid Khdeirat, and confiscated a car owned by the council.

In occupied Jerusalem, the soldiers abducted a young man at the Shu’fat refugee camp, northeast of the city.