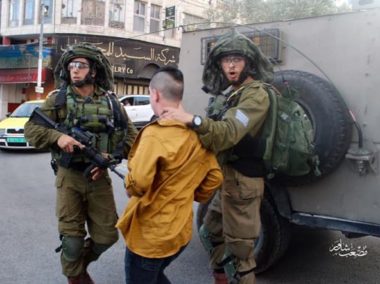 Media sources said the soldiers abducted a child, identified as Abdul-Rahim Raja’e Sha’rawi, 14, in Bab az-Zawiya area, in the center of Hebron city.

They added that the soldiers attacked Palestinian protesters with a barrage of gas bombs and rubber-coated steel bullets, causing many residents to suffer the effects of teargas inhalation.

The soldiers later stopped two other children, who remained unidentified at the time of this report, and abducted them.

In related news, the soldiers detained dozens of Palestinians for several hours in Tal Romeida and the Shuhada Street, in Hebron city.