Army Injures Ten Palestinians, Including A Journalist, In Kufur Qaddoum 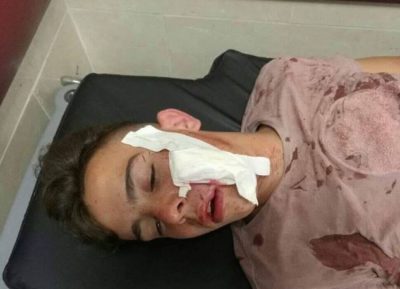 Israeli soldiers attacked, Friday, the weekly procession against the Annexation Wall and colonies in Kufur Qaddoum town, east of the northern West Bank city of Qalqilia, wounding ten Palestinians, including a journalist.

Morad Eshteiwy, the spokesperson of the Popular Committee against the Wall and Colonies in Kufur Qaddoum, said the protesters nonviolently marched from the center of the village, while chanting against the ongoing illegal Israeli occupation and its colonies, in addition to the Manama Conference, and the so-called “Deal of the Century.”

He added that the soldiers resorted to the excessive use of force against the protesters, wounding a child, 17 years of age, with a rubber-coated steel bullet, leading to fractures in his jaw.

Eight other Palestinians were injured by rubber-coated steel bullets, or suffered the effects of teargas inhalation, before receiving treatment in the local clinic.