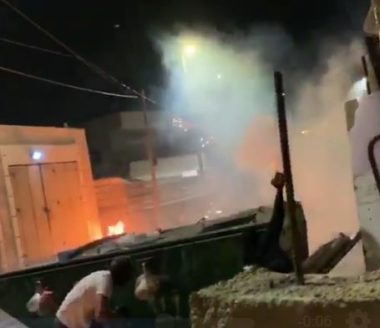 Israeli soldiers injured more than fifty Palestinians, in an invasion into the al-Isawiya town, north of occupied East Jerusalem, starting on Friday evening, when the army killed a young man, until dawn hours, Saturday.

The Palestinian Red Crescent Society (PRCS) said its medics provided treatment to 50 Palestinians; 37 of them were shot with rubber-coated steel bullets, 7 suffered the effects of teargas inhalation, and six others who suffered fractures or bruises.

The PRCS added that the soldiers surrounded the town and installed many military roadblocks, before searching its ambulances, and prevented some of them from entering it.

The soldiers also searched many cars, and interrogated the Palestinians while inspecting their ID cards.

In addition, the soldiers closed and isolated Be’er Ayyoub neighborhood, while many local youngsters hurled stones at them, and some threw Molotov cocktails and used fireworks against the invading soldiers.

Furthermore, the soldiers abducted many Palestinians youngsters, and took them to several detention and interrogation center in Jerusalem.

On Thursday evening, the soldiers injured more than thirty Palestinians, when the army invaded the town, before storming and ransacking many shops and homes, and assaulted Palestinian protesters.

The soldiers also killed a young man, identified as Mohammad Samir Obeid, 21, and injured many others, before imposing a strict siege on the town.