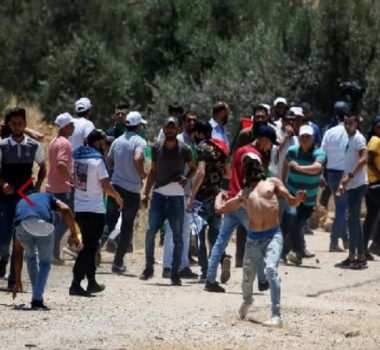 Israeli soldiers injured, Friday, many Palestinians during a procession against the illegal annexation of their lands, in Azmout and Deir al-Hatab villages, east of the northern West Bank city of Nablus, and injured many protesters.

The nonviolent processions started following Friday prayers, when the Palestinians headed to their lands, threatened with illegal Israeli annexation, in the two villages.

The processions were organized by local factions, and the Colonization and Wall Resistance Commission, and were also held in rejection to the so-called “Deal of the Century,” and the Bahrain Conference.

The soldiers resorted to the excessive use of force against the nonviolent protesters, and fired many rubber-coated steel bullets and gas bombs at them, causing several injuries.