Israeli Soldiers Injure Many Palestinians, Cause Fire In Olive Orchards, In Bil’in 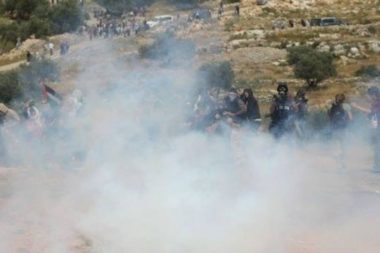 The Palestinians, accompanied by international peace activists, marched from the center of the village and headed towards the Annexation Wall, built on their lands in Abu Lemon area.

They carried Palestinian flags while chanting against the ongoing Israeli occupation and its colonies, and in condemnation of the so-called “Deal of the Century,” and the Manama Conference.”

The protesters also chanted for national unity, the Right of Return of the refugees, the release of all political prisoners, liberation and independence.

The soldiers fired a barrage of gas bombs and concussion grenades at the nonviolent protesters, causing many to suffer the effects of teargas inhalation, and leading to fire in olive orchards, burning many trees.