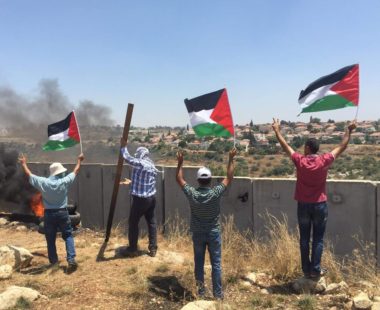 Dozens of Israeli soldiers attacked, Friday, the weekly nonviolent procession against the Annexation Wall and Colonies, in Ni’lin village, west of the central West bank city of Ramallah, causing many injuries.

The locals, accompanied by Israel and international peace activists, marched from the center of the village, heading to their orchards, isolated by the illegal Annexation Wall, and surrounded by colonies.

They chanted against the ongoing illegal Israeli occupation of Palestine, its Annexation Wall and colonies, and marched in condemnation of the so-called “Deal of the Century,” and Manama Workshop, organized by the United States to overrule the legitimate Palestinian rights of sovereignty, liberation and independence,  in addition to all United Nations and Security Council resolutions.

The soldiers attacked the protesters with a barrage of gas bombs, and concussion grenades, causing many to suffer the effects of teargas inhalation.

In related news, the soldiers attacked the weekly nonviolent procession against the Annexation Wall and Colonies, in Bil’in village, west of Ramallah, causing many injuries, and burning several olive trees.

In addition, the soldiers attacked the weekly procession against the Annexation Wall and colonies in Kufur Qaddoum town, east of the northern West Bank city of Qalqilia, wounding ten Palestinians, including a journalist.

On Friday evening, the soldiers abducted a child, identified as Abdul-Rahim Raja’e Sha’rawi, 14, in Bab az-Zawiya area, in the center of the southern West Bank city of Hebron.