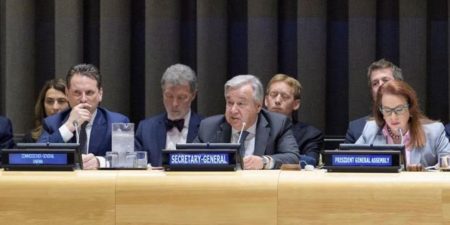 The United Nations Relief and Works Agency for Palestine Refugees in the Near East (UNRWA) received the outstanding support of the representatives of states and institutions at its annual international Pledging Conference, held on 25 June, in New York. Representatives of states and institutions unanimously commended the Agency’s role in preserving the rights and dignity of Palestine refugees and praised its staff members for their commitment in support of the human development of 5.4 million Palestine refugees in the Near East.

UNRWA Commissioner-General Pierre Krähenbühl stated: “Today, in New York, we witnessed another remarkable mobilization and great generosity in support of UNRWA. I am deeply grateful for the trust of United Nations (UN) member states, for the pledges of more than US$ 110 million, and for the commitment to the dignity and rights of Palestine refugees.”

UN Secretary-General Mr. António Guterres, the President of the UN General Assembly Ms. Maria Fernanda Espinoza, Commissioner-General Krähenbühl and numerous member states spoke about the centrality of Agency’s role to the stability and development of the Middle East. Speakers referred to the invaluable contribution of UNRWA to the human development of the Palestine refugee population through education, health care, gender parity, and economic empowerment, in line with the 2030 Agenda for Sustainable Development to leave no one behind. Secretary-General Guterres set the tone by stating that, “Given what is at stake at the human level, at the political and security level, and at the multilateral level, we must rise to the challenge and empower UNRWA to continue its important and impressive work.”

The Conference was an opportunity for UNRWA to showcase the impact of its protection and assistance mandate on the lives of millions of Palestine refugees living in Syria, Lebanon, Jordan, West Bank (including East Jerusalem) and Gaza. Secretary-General Guterres and Commissioner-General Krähenbühl praised the collective mobilization that had allowed the Agency to face immense financial challenges in 2018, and expressed their confidence that the same spirit of solidarity would allow the continuation of education for 532,000 girls and boys and basic health care through to 8.5 million medical consultations this year.

The UNRWA Commissioner-General stressed that the Agency’s current financial situation will be particularly challenging for emergency operations in Gaza and Syria and for UNRWA schools across the region. Food for one million refugees in the Gaza Strip, as well as quality education to Palestine refugee children, but also essential cash assistance to over 400,000 people in Syria, will be severely affected if the Agency’s financial requirements for 2019 are not covered.