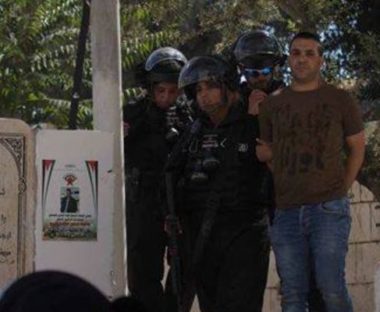 Israeli soldiers abducted, on Saturday at dawn, nineteen Palestinians, including a woman, from their homes in several parts of the al-‘Isawiya town, in the center of occupied East Jerusalem; most of the abducted residents are related to the young man, Mohammad Samir Obeid, 21, who was killed by the army, Thursday.

Media sources said the soldiers stormed and violently searched many homes throughout the town, and interrogated scores of Palestinians while inspecting their ID cards.

Razan al-Jo’ba, the lawyer of Wadi Hilweh Information Center in Silwan (Silwanic) has reported that the soldiers carried out extensive and very violent searches of homes before abducting the Palestinians, including a woman, identified as Ibtisam Obeid.

She added that, although Obeid has been married to a man from the town, and has been living there with him and their children for the past seventeen years, she was never granted residency, and Israel has frequently tried to remove her from occupied Jerusalem, including when she was forcibly exiled from the city in April of last year.

The lawyer also said that she managed to visit the abducted Palestinians in several interrogation and detention centers, and observed clear marks of having been beaten, in addition to being bound with very tight handcuffs, and being blindfolded for extended periods.

It is worth mentioning that the soldiers also injured at least 50 Palestinians, during the ongoing invasions into the town, starting on Friday evening, until dawn hours, Saturday.

On Friday evening, the soldiers detained Sa’ed Dari and Jamal Dari, while standing in front of their homes, and held them from several hours in the town’s cemetery, before moving them to an interrogation facility.

The Palestinians, who were abducted at dawn, Saturday, have been identified as: