Israeli Soldiers Kill One Palestinian, Injure Many, In Jerusalem 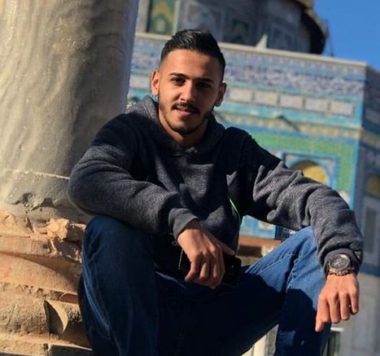 Israeli soldiers and the police invaded, on Thursday evening, the al-‘Isawiya town, north of occupied East Jerusalem, killed a young Palestinian man, and injured many other residents, in addition to imposing a strict siege on the town.

Media sources said the soldiers invaded Obeid neighborhood in the town, and attacked many Palestinians while inspecting their ID cards, in addition to searching homes and shops.

They added that the soldiers fired many live rounds, rubber-coated steel bullets, gas bombs and concussion grenades at Palestinian youngsters protesting the invasion.

Local nonviolent activist, Yousef Obeid, said the soldiers killed a former political prisoner, identified as Mohammad Samir Obeid, 21, after shooting him with several bullets, including a live round in the heart.

He added that the soldiers also injured four other Palestinians, causing mild-to-moderate wounds.

After killing the young man, the soldiers took his body away, and assaulted several Palestinians with clubs and batons.

Furthermore, the soldiers imposed a strict siege on the town, and prevented the residents, including ambulances, from entering or leaving it.

An eyewitness, who was standing next to the slain Palestinian, said the soldiers shot him with three live rounds from a close range, including the fatal round in the heart, and one that struck him in his leg, and added that the shooting had no cause or justification, especially since it was carried out an hour after the nonviolent protest ended.

His statements, alongside other witnesses, contradict allegations by the police that the slain young man “lit firecrackers in the direction of the police,’” allegedly “endangering their lives.”

It is worth mentioning that the invasion, and the killing of the young man, took place after the army attacked the nonviolent procession held by the locals against the daily invasions and violent searches of homes and property, carried out by the Israeli military and the police.

The killing of the young man also led to protests in the neighborhoods and towns of Wadi al-Jouz, at-Tour, al-‘Isawiya, Shu’fat, Shu’fat refugee camp and Abu Dis.

Mohammad was taken to Hadassah Israeli Medical Center in Jerusalem, where his death was confirmed by the surgeons and physicians, including a Palestinian surgeon, who is also from al-‘Isawiya.

An eyewitness, who was also injured after the soldiers attacked him, and went to Hadassah, said the young man was shot by a police officer, wearing an armored suit and a helmet, and used a pistol in shooting and killing Mohammad Obeid.

The eyewitness added that the soldiers and the police, who also went to the urgent care unit in the hospital, prevented the family and friends of the slain Palestinian from entering it, before assaulting many Palestinians, including his family, causing serious lacerations.

The slain young Palestinian man is a former political prisoner, who was released just a year ago, after spending twenty months in prison.

He was also abducted and imprisoned several times since he was a young teen, spending more than four years in prison.

It is worth mentioning that, on March 25 2016, Israeli soldiers abducted his sister, Sondos Obeid, 16, after alleging she carried a knife; she was sentenced to five months and a fine.

Their father is a former political prisoner, who was abducted and detained several times, including being held under Administrative Detention orders, without charges or trial.

The nonviolent protests in al-‘Isawiya have been ongoing for more than three weeks, as the police and the army continue to invaded homes and stores, in addition to imposing high fines on the Palestinians, and the frequent abduction and imprisonment of many locals.

These protests are held by the local Palestinian residents of the town, in addition to Israeli peace activists.

Videos By Silwanic (The Wadi Hilweh Information Center In Silwan)