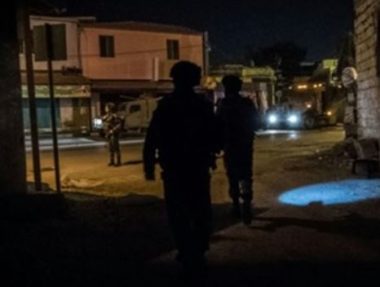 The Palestinian Prisoners’ Society (PPS) has reported that Israeli soldiers abducted, on Thursday, at dawn, at least nine Palestinians, including former political prisoners, from their homes, in several cities, towns and refugee camps across the occupied West Bank.

It added that the soldiers also detained Morad Tawalba for several hours, before releasing him.

In addition, the soldiers invaded and searched homes in Kobar town, west of the central West Bank city of Ramallah, before abducting two former political prisoners, identified as Yahia Mahmoud Amriyya, and Qassam Majd Barghouthi, who was only released from prison three days ago.

During the invasion into Kobar, the soldiers attacked many Palestinian protesters, and fired several gas bombs and concussion grenades at them, in addition to surrounding homes and buildings.

Furthermore, the soldiers invaded Beit Ummar town, north of the southern West Bank city of Hebron, and searched many homes.

The soldiers also abducted a former political prisoner, identified as Mahmoud Mohammad Abu Warda, from his home in the al-Fawwar refugee camp, south of Hebron.