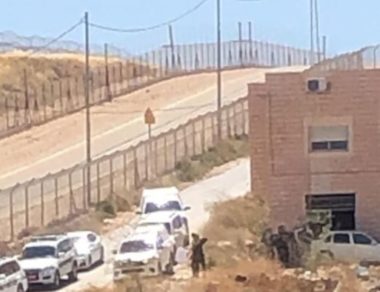 Hamada Hamada, the head of Wadi al-Hummus Committee said the families have filed appeals with the Israeli High Court in an attempt to save the sixteen residential building of more than 100 apartments.

He added that the Israeli “justification” to the destruction of their buildings is “due to their proximity” to a section of illegal Annexation Wall, which was built on Palestinian lands owned by the families in the neighborhood.

He added that the families are awaiting the ruling of the High Court, especially since they petitioned it to hold an extended hearing to listen to their cases, and to investigate the documents they have submitted.

However, the soldiers invaded the neighborhood, and they not only took measurements of the 16 apartment buildings, but also of many roads and surrounding buildings.

Hamada also said that the families were given until the 18th of July to demolish the buildings, or else, the City Council will commence with the destruction and bill them for the costs in addition to heavy fines and fees.

It is worth mentioning that, two weeks ago, the Israeli High Court approved the demolition of the sixteen apartment buildings, and one week later, the army ordered the families to commence the demolition and finish it within three weeks.

Most of the apartment buildings Israel intends to demolish are in Area A of the occupied West Bank, which means that they are under the supervision and administrative control of the Palestinian Authority, and were licensed by it.

However, Israel is claiming the buildings were constructed without permits for the City Council in occupied Jerusalem, and cited “security considerations” for their destruction.

It is worth mentioning that, despite the Israel allegations, the real reason for demolishing the buildings is because Israel prevents the Palestinians from building within 250 meters from the illegal Annexation Wall, which was built in the first place on Palestinian lands across the West Bank, including the areas surrounding occupied East Jerusalem.

In related news, the soldiers demolished the foundations of two buildings in Wadi al-Hummus neighborhood in the town.