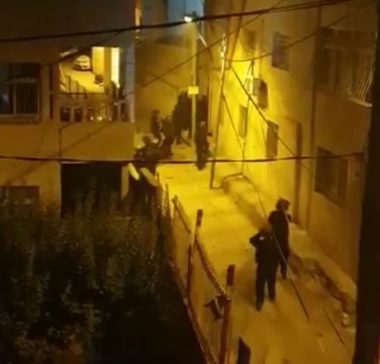 Israeli soldiers invaded, on Saturday evening, the al-‘Isawiya town, in occupied Jerusalem, and removed the mourning tent of Mohammad Samir Obeid, 21, who was killed by the army, Thursday.

Mohammad Abu al-Hummus, a member of the Follow-Up Committee in al-‘Isawiya, said the soldiers attacked many Palestinians in the tent, and surrounding areas, and tore posters of slain young man.

He added that the soldiers caused many injuries among the Palestinians, including the children and the elderly.

The invasion led to massive protests, and the Palestinians hurled stones at the soldiers, in addition to countering their invasion with fireworks and Molotov cocktails, while the army fired live rounds, rubber-coated steel bullets and gas bombs.

Also Saturday, the soldiers invaded and ransacked Obeid’s home, tore his posters and removed Palestinian flags from the buildings.

It is worth mentioning that, after killing Obeid, the soldiers took his corpse, and did not return it to the family for burial.