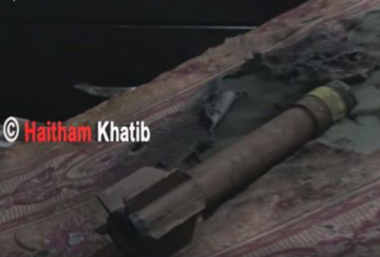 Dozens of Israeli soldiers invaded, on Friday at dawn, villages in the central West Bank governorate of Ramallah, abducted three Palestinians, injured a photojournalist, and fired a rocket at a home.

Media sources in Ramallah said the soldiers invaded villages in the western part of the governorate, before imposing a strict siege on Kafr Ni’ma and Bil’in.

They added that the soldiers stormed and ransacked homes, before abducting Mahdi Abu Rahma and Tareq Abu Rahma, from Bil’in, in addition to Jaber Abdo from Kafr Ni’ma.

The soldiers also fired small “Energia” rockets into the home of Mahdi Abu Rahma, in Bil’in, causing fire and damage to parts of his property, and furniture.

Palestinian photojournalist Haitham Khatib, from Bil’in, said that the soldiers surrounded his home, and shot him with a rubber-coated steel bullet as he approached his property.

At 3AM this morning, an Israeli civilian marked bus, leading the way for military vehicles, entered my home village of Bil’in. People immediately began exiting their homes to find out what was going on.

I got into my car and pursued the military vehicles, to the neighboring village of Kufr Ni’ma, were the soldiers had gone.

Following this I returned to Bil’in in my car, finding Israeli soldiers surrounding my home and all over our streets. Dressed in my press vest and armed with only a camera, I attempted to get closer.

Israeli soldiers then shot me in my left leg, with a rubber coated steel bullet, they continued to fire at me several times as I quickly hid behind a wall.

After this I went to visit my neighbor, Mahdi Abu Rahma, discovering that he had been arrested after the Israelis had fired an electronic rocket-type munition at the house. Mahdi’s windows were shattered and his door damaged. His small children were in the home when this munition was fired by the soldiers.

I later discovered that Tareq Abu Rahma, had also been arrested.

The Israelis were shooting live ammunition, tear gas, sound grenades as well as other munitions. They continued firing as they left.

There was absolutely no explanation for what they did and we are still waiting for news on how many may have been arrested in Kafr Ni’ma.