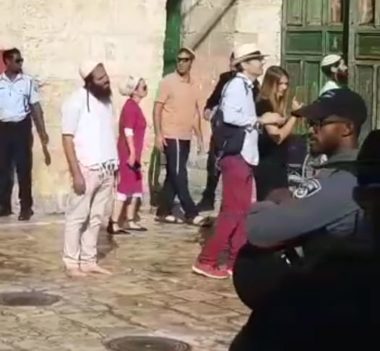 After dozens of Israeli colonialist settlers, accompanied by soldiers and police officers, stormed the courtyards of the Al-Aqsa Mosque in occupied Jerusalem, and conducted provocative tours into the holy site, the soldiers abducted two Waqf workers, and one worshiper.

The Maan Palestinian News Agency has reported that the soldiers abducted Anas Dabbagh and Ali Bkearat, who works for the Palestinian Waqf and Islamic Endowment, in Al-Aqsa Mosque, and took them to am interrogation facility.

It added that the two were working in the Dome of the Rock Mosque, in Al-Aqsa Mosque compound, when they were abducted.

Many employees of the Waqf Department, in addition to dozens of worshipers, gathered in the Al-Aqsa Mosque compound, protesting the abduction of the two employees, and the attempts to stop maintenance work in the holy site.

Furthermore, the soldiers stopped a young man near the “Gate of the Tribes,” and took him to an interrogation facility, in addition to stopping and searching the Muslim worshipers, and held their ID cards before allowing them into Al-Aqsa.

The Quds News Network has reported that more than 150 Israeli colonialist settlers, accompanied by dozens of police officers, stormed the courtyards of the holy site, and conducted provocative tours, after the soldiers forced scores of Palestinians away. 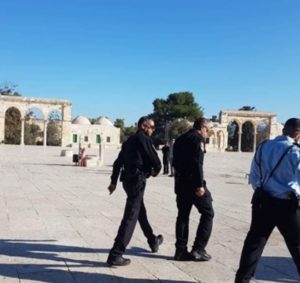