Israeli Soldiers Abduct Three Palestinians, Including One Woman, In Jerusalem 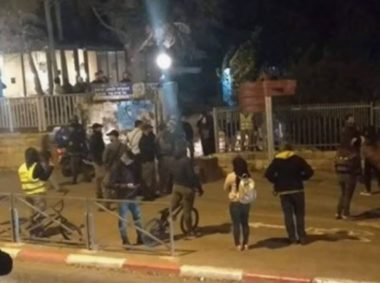 Israeli soldiers abducted, on Sunday evening, three Palestinians, including one woman, in front of the Hebrew University in occupied Jerusalem, after many students held a nonviolent activity in solidarity with the slain Palestinians in Gaza, and Israel’s arbitrary excessive use of force against civilians.

The Palestinian News & Info Agency (WAFA)  said the soldiers resorted to the excessive use of force against the nonviolent protesters, before abducting three, including a young woman.

WAFA added that the students were just practicing their legitimate right to protest the Israeli crimes against the civilians and the escalating violations against the Palestinian people.