Netanyahu: “Government With Arab Coalition Partners Is A Serious Threat To Israel” 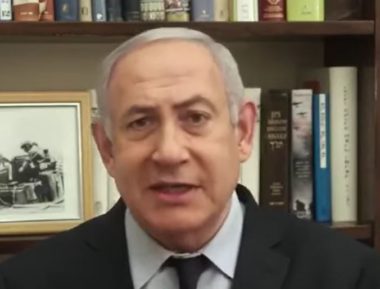 In a video message, Israeli Prime Minister Benjamin Netanyahu, “warned” that any government that has Arab (Palestinian) coalition partners “poses a serious threat to Israel.”

In his message, Netanyahu stated that the Israeli President Reuven Rivlin asked him not to head to a new election.

Netanyahu added that the leaders of Kahol Lavan (Blue White) Party, Benjamin (Benny) Gantz and Gabi Ashkenazi, are “holding talks with members of Knesset who support terrorist groups and seek the destruction of Israel.”

“Can you imagine when they (his security cabinet) tell me when need to bomb here and bomb there, and then I will say, wait, I need to consult Ayman Odah; I need to consult Ahmad Tibi! Can I imagine something like that, this never happened in Israel’s history?!”

“This is something that threatens Israel’s security; it is an existential threat to Israel; This is a slap to the face of Israel’s democracy, to the face of those who voted for Kahol Lavan,” he stated, “If their voters understood that Gantz wants a coalition government with the support of the Arabs, they wouldn’t have given him even five seats!”

“I am calling on Ashkenazi and Moshe Ya’alon (former Israeli army Chief of Staff); you both served in the army, you are former army generals; you need to talk to Gantz, who is also a former army general, and remind him that those who you want to be coalition partners with, of the Joint List, and you want your government to depend on, want to try you as war criminals! Are you crazy?! There is still enough time to avoid all of this, talk to him (Gantz), and come back to your senses; lets from a national Jewish unity government, exactly as our people seek and want.”