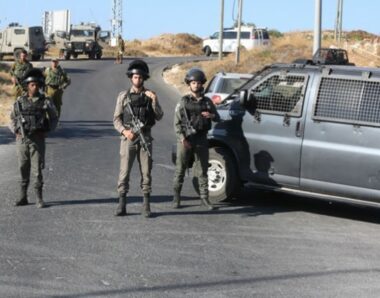 Israeli soldiers abducted, on Sunday evening, three young Palestinian men at a sudden military roadblock near Gush Etzion junction, on the road between Bethlehem and Hebron, in the southern occupied West Bank.

Eyewitnesses said the soldiers stopped and searched a car near the junction and abducted three young men.

The soldiers also searched the cars before taking the abducted young men to Etzion military base and security center.

The soldiers also stopped, searched many Palestinian cars, and interrogated the Palestinians while inspecting their ID cards.

In related news, the soldiers detained three Palestinians in the Northern Plains, in Jordan Valley of the occupied West Bank, and released them a few hours later.

In the Gaza Strip, the soldiers fired many live rounds at Palestinian shepherds on lands near the perimeter fence, east of the al-Maghazi refugee camp, in the central Gaza Strip, forcing them to leave.