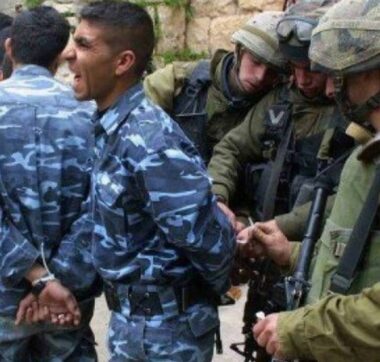 Israeli soldiers invaded, on Saturday evening, the village of Ni’lin, west of the central West Bank city of Ramallah, and abducted twelve Palestinian on-duty police officers, in addition to confiscating their vehicles and weapons.

The Mayor of Ni’lin, Emad al-Khawaja, stated that the Palestinian police officers were on a mission to apprehend a resident, wanted by the police over criminal charges.

He added that Israeli soldiers invaded an area near where the Palestinian police officers were operating and ambushed them while heading back to Ramallah.

It is worth mentioning that the Israeli army and the police have been preventing the Palestinian police from entering any Palestinian community in Area C of the occupied West Bank, since the Palestinian Authority stopped all forms of coordination with Israel on May 9th.

Area C constitutes 60% of occupied West Bank lands that fall under Israel’s sovereignty, according to the Oslo agreement, which was signed in 1993, between the Palestinian Liberation Organization and the Israeli occupation.

The Oslo agreement split the occupied  West Bank into three regions; ‘Area A’, theoretically under autonomous Palestinian control and consisting of 17.7% of the overall size of the West Bank, yet constantly invaded by the soldiers, ‘Area B’, 21%, and under shared Israeli-PA control where the Palestinian have some form of administrative and civil authority, and ‘Area C’, the largest section of West Bank, falling under complete Israeli control.

However, since Israel’s takeover of the Palestinian lands continued, and its construction and expansion of its illegal colonies seriously escalated, Area C remained under full Israeli control, and the anticipated “final status agreement became just a status quo.