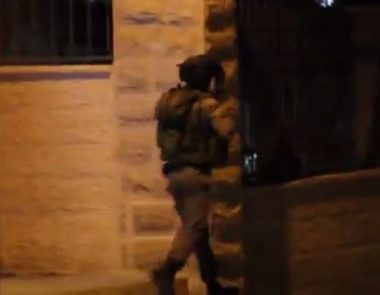 Many armored military jeeps invaded the town, approximately at 4 at dawn, before the soldiers stormed the home of former political prisoner Mahmoud Nafeth Jaffal, 20, and violently searched the property, causing excessive damage.

The soldiers then abducted Mahmoud, and confiscated his mobile phone, before moving him to an unknown destination.

Mahmoud is a former political prisoner who was abducted and imprisoned by Israel several times before. His most recent release from detention was in 2015.

The soldiers also invaded the family home of Mohammad Ziad Jaffal, 18, and ransacked the property, causing damage, before abducting him.

The invasion into Abu Dis led to clashes between the soldiers and dozens of local youths, who hurled stones and empty bottles at the military vehicles, while the soldiers fired dozens of rubber-coated steel bullets, gas bombs and concussion grenades.

The soldiers withdrew from the town and headed to a military base that was built on Palestinian lands, in Abu Kamel Mountain area, in Abu Dis.