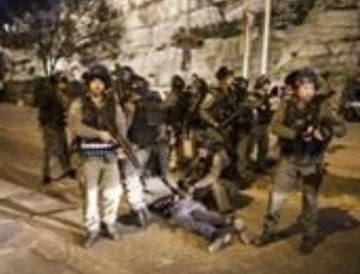 The soldiers abducted the two Palestinians, who remained unidentified at the time of this report, after stopping them in the Old City of Jerusalem.

They were handcuffed before the soldiers took them to a detention and interrogation facility in the city.

On Sunday evening, the soldiers closed the southern entrance of Nablus city, in the northern part of the occupied West Bank.

Media sources in Nablus said the closed road is near Huwwara military roadblock, and that the soldiers sealed it after groups of extremist Israeli colonizers protested the evacuation of an illegal outpost, which was installed on Palestinian lands, south of Nablus.

The colonialists were protesting near Yitzhar illegal colony’s junction, before the soldiers closed the road to all Palestinian traffic.