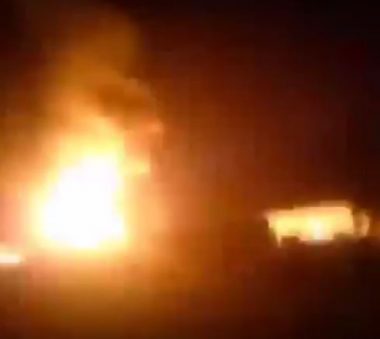 The Israeli Air Force fired, on Monday at dawn, several missiles into sites, believed to be run by the al-Qassam Brigades, the armed wing of Hamas movement in the Gaza Strip, causing damage.

Media sources in Gaza said the sounds and impacts of the explosion could be heard and felt across the entire area and led to property damage.

The Israeli escalation is the fourth against the coastal region in 24 hours, after the army fired missiles at what it called “Palestinians launching burning balloons,” while sources in Gaza said another site of al-Qassam Brigades was targeted, east of the al-Boreij refugee camp, in central Gaza.

On Sunday at dawn, an Israeli military drone fired a missile at a Palestinian car which was parked near a mosque, east of Gaza City.

The Israeli military, its government and affiliated “media” outlets, have been reporting on the “incendiary kites,” as the cause for the ongoing escalation in Gaza.

They even engaged in smear campaigns against Palestinians slain by Israeli snipers, including the medic, Razan Najjar, by alleging she was a “human shield for Hamas.”

In an interview shortly before Razan was murdered by an Israeli sniper, she said what she does as a medic, the help that she gives to wounded Palestinians is meant to help the people and ease their suffering, and added that the “medics are the shield of the people.”

The statement, as simple and clear it was, was abused and misused to justify her murder by an army sniper, stationed safely hundreds of meters away.

She was the second medic to be killed by the army since March 30th, 2018, after the soldiers killed, Mousa Jaber Abu Hassanein, 36.

The army also injured 223 medics, and caused damage to 37 ambulances.

In addition, the soldiers killed two journalists, identified as Yasser Mortaja, 31, and Ahmad Abu Hussein, 25, and wounded 144 others.

His death brings the number of Palestinians, who were killed by Israeli army fire since March 30th, to 126, including two journalists and thirteen children