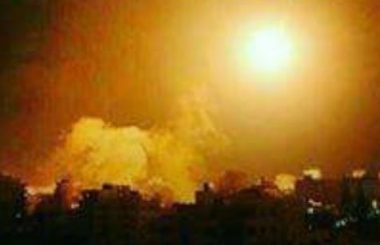 Palestinian Medical sources have reported that two Palestinians were injured on Saturday evening, after an Israeli military drone fired a missile at Palestinians allegedly flying kites in central Gaza.

The sources said the drone fired a missile at Palestinians east of the al-Boreij refuge camp, in central Gaza.

One of the injured Palestinians suffered life-threatening wounds, before the two were rushed to the al-Aqsa Hospital, in nearby Deir al-Balah.

Israeli daily Haaretz quoted the military claiming that the strike “targeted Palestinians who launched burning kites and balloons into lands across the border fence”, after fires broke out in seventeen nearby fields, and added that the strikes “were not meant to harm Palestinians, but to deter them”

It added that the kites and balloons have reported resulted in burning 5000 Dunams (1,235 Acres) of farmland, causing estimated losses of $2 million since the protests started on March 30.

On Friday, Dr. Ashraf al-Qedra, the spokesperson of the Health Ministry in Gaza, has exported that one Palestinian, identified as Ahmad Ziad Tawfiq al-‘Aassi, 21, died from serious wounds he suffered several days earlier, when an Israeli gas bomb struck him directly in his head, causing very serious wounds.

The Palestinian was rushed to the Gaza European Hospital, in Khan Younis, in the southern part of the Gaza Strip, and remained in the Intensive Care Unit until he succumbed to his serious wounds.

His death brings the number of Palestinians, who were killed by Israeli army fire since March 30th, to 126, including two journalists and thirteen children.