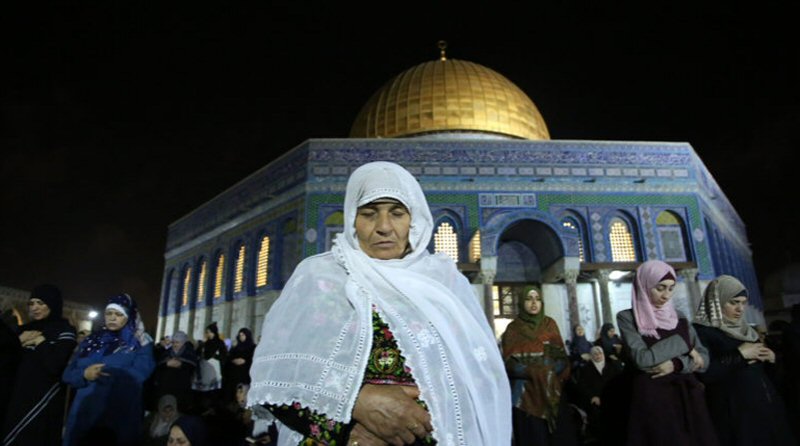 One group of settlers attempted to invade the compound. Another performed religious rituals at a gate to al-Aqsa compound.

On Thursday night, June 14, 2018, a group of settlers tried to invade al-Aqsa Mosque through the Hotta and Faisal gates. Palestinians inside the Mosque’s courtyard confronted them and prevented them from entering. Shortly after, Israeli police arrived and removed the settlers, all of whom were young women.

Thursday night was the last evening of Ramadan. Though Israeli authorities usually ban settlers from provocatively touring al-Aqsa Mosque for the last 10 days of Ramadan, this year they shortened that time period to seven days. Settler groups, nevertheless, protest any restrictions on their access to the holy site, where they seek to perform religious rituals – a practice forbidden by the agreement between Israeli authorities and Jordan regarding the compound.

Also on Thursday night, around 30 settlers performed religious rituals at al-Aqsa’s al-Asbat Gate. Palestinians gathered there in protest of the provocative action, which delayed Palestinians from entering the al-Aqsa compound and praying and breaking their fasts. Israeli police forced the Palestinians to go away and protected the settlers.

Waqf officials condemned the settler provocations and emphasized them as an organized effort to unilaterally change the political status quo at al-Aqsa.

Israeli movement restrictions on Palestinians in Jerusalem were heightened during Ramadan — the only time some Palestinians from the West Bank are permitted to visit their holy city. Israeli authorities did not allow any Palestinians from Gaza to travel to Jerusalem for Ramadan this year. The Israeli government has been emboldened since US President Donald Trump recognized Jerusalem as the capital of Israel.