Israeli Soldiers Abduct Two Teens And A Journalist, Injure Many, Near Ramallah 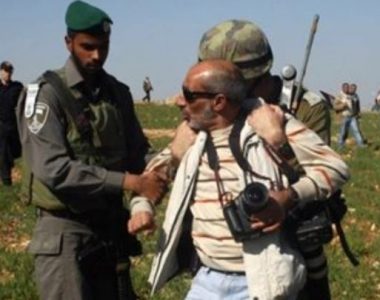 Israeli soldiers abducted, Wednesday, two Palestinian teenage boys, and a journalist, after the army attacked dozens of protesters near Ofer military base and prison, west of Ramallah, in central West Bank.

The WAFA Palestinian News Agency said the soldiers resorted to the excessive use of force against Palestinian protesters, who gathered near Ofer during a court hearing for nonviolent activist Monther ‘Amira.

It added that the soldiers fired many gas bombs, concussion grenades and rubber-coated steel bullets at the protesters, causing many to suffer the effects of teargas inhalation.

Furthermore, the soldiers attacked many journalists with concussion grenades, and pushed them out of the area.

The protesters marched carrying Palestinian flags, and posters of Amira, while chanting against the ongoing Israeli occupation of Palestine.

It is worth mentioning that Amira was abducted on December 27th, near the northern entrance of Bethlehem, during a nonviolent procession against the illegal U.S. recognition of occupied Jerusalem as the unified capital of Israel.

In related news, the soldiers attacked a nonviolent procession at the main entrance of al-Biereh city, near Ramallah, and fired many concussion grenades.