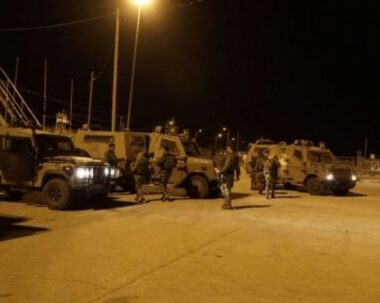 In Hebron, in the southern part of the occupied West Bank, the soldiers invaded Halhoul town, north of the city, stormed and searched several homes, and abducted two siblings, Hamza Eyad al-Baw. 26, and his brother, former political prisoner, Islam al-Baw, 20.

The soldiers also installed roadblocks on Hebron’s northern roads and the streets leading to Sa’ir, Halhoul, and Yatta before stopping and searching dozens of cars and interrogating many Palestinians while inspecting their ID cards.

In Bethlehem, the soldiers invaded the Wadi Shahin area in the center of the city, searched homes, and abducted Ahmad Salem Obeyyat, 47, in addition to former political prisoner Nidal Obeyyat.

The soldiers also invaded and searched several homes, including those owned by Hussin and Nidal Obeyyat, in the al-Fredis village, east of the city.

In the Ramallah and al-Biereh governorate, in the central West Bank, many army jeeps invaded the al-Biereh city, and Betunia town west of Ramallah searched and ransacked many homes and abducted five Palestinians.

The soldiers also invaded the nearby villages of Qibya and Shuqba but withdrew later without abducting any Palestinian.

In Qalqilia, in the northern West Bank, the soldiers abducted Abdullah Zoheir Walweel and Mohammad Bilal Freij, both in their thirties, after stopping them at a military roadblock east of Qalqilia.

In Tulkarem, also in the northern West Bank, many army jeeps invaded the Tulkarem refugee camp before the soldiers invaded and searched homes and abducted two Palestinians, Ala’ Amer Kelibi and Hussin Nabil Sheikh Ali.