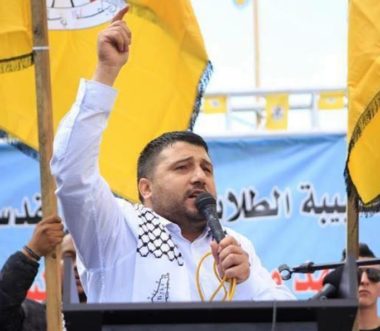 Israeli soldiers abducted, on Saturday evening, twenty-six Palestinians, including the secretary of Fateh movement, in occupied Jerusalem, and moved them to several detention and interrogation facilities in the city.

The soldiers abducted Shadi Mitwer, the Secretary of Fateh Movement in Jerusalem, before cuffing and blindfolding him, and took him to an interrogation facility.

It is worth mentioning that Mitwer is a former political prisoner, who was repeatedly detained and imprisoned by Israel for his political and social activities in the occupied city.

Furthermore, the soldiers abducted 25 former political prisoners from many parts of Jerusalem, and took them to several interrogation centers.

The attacks and abductions took place while more than 400 illegal colonialist settlers, started provocative tours in the courtyards of the Al-Aqsa Mosque, to celebrate the occupation and the so-called unification of the city.

The Israeli army and police also closed the gates of al-Qibli Mosque, in the Al-Aqsa Compound, locking dozens of worshipers inside.

It is worth mentioning that the soldiers also abducted eight Palestinians from Nablus governorate, in northern West Bank, while heading back to their homes from the Al-Aqsa Mosque, and took them to Ofer prison, near Ramallah, in central West Bank.